Jogging the memory with Shoes

Today, I wanted to share my latest little one-night coding project. But first, a little back story. I’ve been looking for a new Mac OS X GUI text editor for the past couple of days because TextMate has once again passed its free 30 day period for me. I don’t mind editing text purely with keyboard commands in a terminal window, but sometimes it’s nice to have a mouse and menus when you’re working with chunks of code. I’ve read studies from Apple that while using only keyboard shortcuts seems faster, in truth the mouse is quicker at the same task.

On the command line, I’m more likely to use vi than emacs, although I know my way around both. So when I found MacVim, an “experimental” Cocoa interface to vim, I knew I’d found my new editor on the Mac. I’ve already tried all the free editors that worked on Mac OS X in the past, including jEdit (too slow), Eclipse (really an IDE, and even slower), Komodo/Smultron/etc., and even most of the for-pay editors (BBEdit, aforementioned TextMate, and SubEthaEdit). MacVim really takes the cake, as the vim core understands far more languages & markups than TextMate’s bundles; it’s as fast as one can perceive a program to be; and it adds a GUI (gooey!) layer of goodness on top, including tabs, mouse-based copy/paste/cursor positioning, and a full-screen editing mode to eliminate distractions.

I’ve also been playing with Shoes, a framework for making GUI apps in Ruby. Shoes is the brainchild of Ruby super-hacker WhyTheLuckyStiff, and I wouldn’t have heard about it without Phil Crissman‘s twittering about his interest in using it.

The super simple syntax in Shoes lets you lay out GUI components like elements in a web page, and graphics/animations are easily added. Most apps are as simple as:

But the real frustration is in the lack of documentation. There are a handle of sample apps on the project’s SVN web repo and roughly 4 tutorials. The full documentation is currently being printed up as a real-deal book by WhyTheLuckyStiff, and I didn’t feel coughing up the $8+shipping to get a copy. (& knowing Why, I wouldn’t understand anything in it anyways). So, I’ve been playing around and doing a lot of trial and error based on the sample apps to figure out functionality. Luckily, Quicksilver makes the run-test-repeat loop very tight. (For the interested, CMD-Space into QS, type “Shoes” TAB TAB, first three letters of my Shoes’ script’s filename, ENTER & it’s running. Having to launch the .app rather than calling from the CLI is a problem unique to the OSX version of Shoes. On Linux it’d be $ ./shoes App.rb )

My first little app was nothing more than adding file saving and opening functionality to the sample edit.rb script, added color and formatting, buttons, etc. and then modified it to catch a few more commands given via keypress. Nothing too fancy, but it was a good way to figure out the majority of Shoes’ internals. While it was a fun idea to entertain, Shoes is not the ideal platform to develop a text editor in. Luckily, I don’t have to, as I’ve got MacVim.

But maybe I could use a little tool to help me remember all the various vi commands? 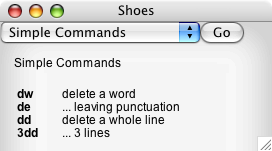 Introducing my cheatsheet widget for vim in Ruby Shoes. It’s based off the heavy cardstock “vi Quick Reference” sheet that everyone in my vi-specific CSCI classes was issued (I imagine there’s an emacs equivalent for classes where emacs is encouraged). Believe it or not, the longest part of creating this app in Shoes was typing in all the command hints off the physical copy & thinking up multiple ways to implement classes containing the data in Ruby. The reinforcement of forgotten vi command skills in developing this widget in MacVim should be obvious.

Using the drop-down allows you to access such diverse topics as: 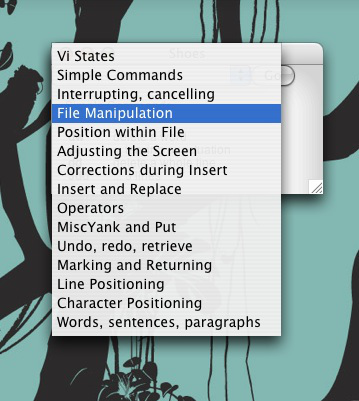 It really does make a nice little app to have running off to the side, and I’d argue that it was far simpler to create than an Adobe AIR app or Apple Dashboard widget would have been with the same functionality.

Tomorrow, if suitably motivated I may extend it to read in any number of .yml files containing ‘cheat sheet’ definitions, and add definitions from any number of the PDF cheatsheets I’ve accumulated over the years and never bothered to print out (glancing in my PDF dir, I spy PHP, MySQL, sqlite3, microformats, and even, yes, Ruby & Ruby on Rails cheatsheets in there). Using graphics I’ll implement a simple ‘tab’ interface across the top and clean it up so it looks slick. (Red background when you click on the Rails tab? With little Ruby icon hovering there? Yes!)

Coding in Ruby is so much fun, it makes trivial things like this interesting, and Shoes follows in that tradition.

Until next time, happy hacking.